Falcon’s Got Talent: A Review 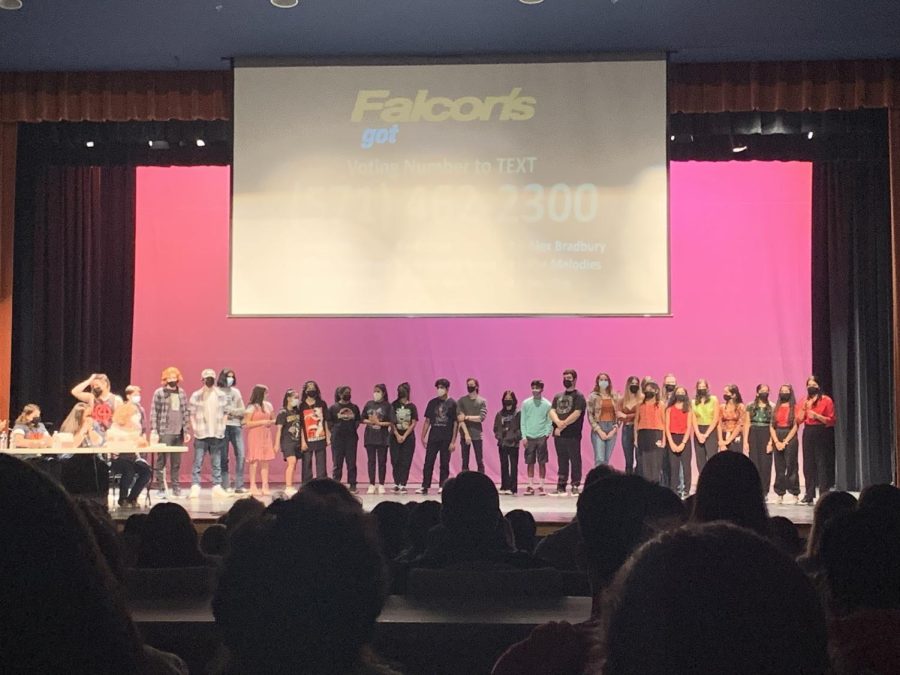 This year’s Falcon’s Got Talent was one of the most entertaining ones in ages! From singing to dancing to geography, the vast pool of talent from the Briar Woods student body was showcased in front of cheering crowds, with all the acts competing to win the coveted first place.

After an energetic intro from Briar Woods’ beloved DJ Mario, the band Inspectre set a high bar with a lively rendition of ‘Brave as a Noun’ by AJJ. “It was fun, it was a good learning experience, I enjoyed it a lot. I specifically liked crawling around on the floor like a weirdo. That was interesting. Glory to all the winners, I will destroy them next year whether they like it or not. I will find them and I will say mean things to them. Next year will be even better. We’ll get a lot of new talent… better than me,” said lead guitarist Ryan Vulgamore.

After Inspectre’s performance, rapper Parth Chaudhary, also known by his stage name, Foolish Desperado, performed his original song ‘P.O.V.’, which succeeded in hyping up the audience and getting them into an enthusiastic frenzy, “I felt bad… that I didn’t make any money. I lost $10 [the cost of the fee to enter the competition]. Whoever started [waving their smartphone flashlights] I was happy that they did so, because that was really cool. I want to give them a big thanks. A huge thanks, even.”

A couple acts later, Briar Woods’ Hip Hop Club, B-Crew performed a stunning dance routine that got much applause from the crowd. “The team and I loved the energy between us and the audience while we were performing. The crowd cheering for us and hyping us up was a rush like no other,” said B-Crew captain Aarya Walvekar, “We’ll definitely aim for first place next year!”

Next up, Megan Acevedo and Bryan Lefcowitz performed a harmonious and energetic rendition of AC/DC’s ‘Thunderstruck’ on two cellos, inciting roars of approval from the audience. “We felt great about our performance. We think the pressure and excitement of the crowd help us play out even better than normal. There were small things that were slightly off, but overall we were very proud of our performance,” said Megan and Bryan, “We practiced for it every day for months during orchestra class, advisory, or any other breaks we got during school… we dedicated entire lunch blocks to practicing. Winning third felt amazing to us… we didn’t even expect to be on the leaderboard. We simply just wanted to play this difficult piece we’d been working on for months for people to enjoy.”

After Megan and Bryan, Arya Arun showcased his unique and impressive talent of being able to name the capital of any country the audience asked him. After knocking out a few easy countries like Italy and Russia, Arya inspired wild cheering and excited applause after he named the capitals of nations like Turkmenistan and Chad with zero hesitation, culminating in the crowd yelling “ARYA! ARYA!” over and over again as his act ended. “I felt normal,” said Arya about his performance, “I practiced by quizzing myself on the capitals of each country.” After some praise from the judges, it was onto the next act.

Next up, Alex Bradbury, the eventual winner of the night, sang his beautiful, full-rendition of the Billy Joel hit ‘Piano Man’, all while playing the piano, harmonica, and cracking snarky jokes about the lyrics. “I felt good to know that a lot of people enjoyed it,” said Alex, “I’ve been playing the song for a few years, I basically know it by heart.” After the end of his performance, unprecedented cheering and applause rang out around the auditorium, a foreshadowing to his eventual victory.

After all the other acts – which included piano performances and more singing – the winners were voted on by the audience via QR code. Megan Acevedo and Brian Lefcowitz won third place with their exciting cello playing, B-Crew won second with their dynamic dancing, and finally, to no one’s surprise, Alex Bradbury won the coveted first place spot, much to the delight of the raving crowd.

Audience members were enthralled with the performances! “The Briar Woods Falcon’s Got Talent is a great show… you laugh, you scream, you cry, you gasp,” said junior Olivia Martin. “It was better than the previous ones. The performances were more professional,” said junior Jack Gallardo.

This talent show will certainly be remembered as one of the best in school history. The energy that the audience and the acts brought to the auditorium after being cooped up over the COVID pandemic was unprecedented and has made it clear that Briar Woods has a vast supply of talent. The excitement of the crowd and the quality of the performances means that next year’s Falcon’s Got Talent has a lot to live up to!