Terror Attack in Mosque Sign of New War in Afghanistan 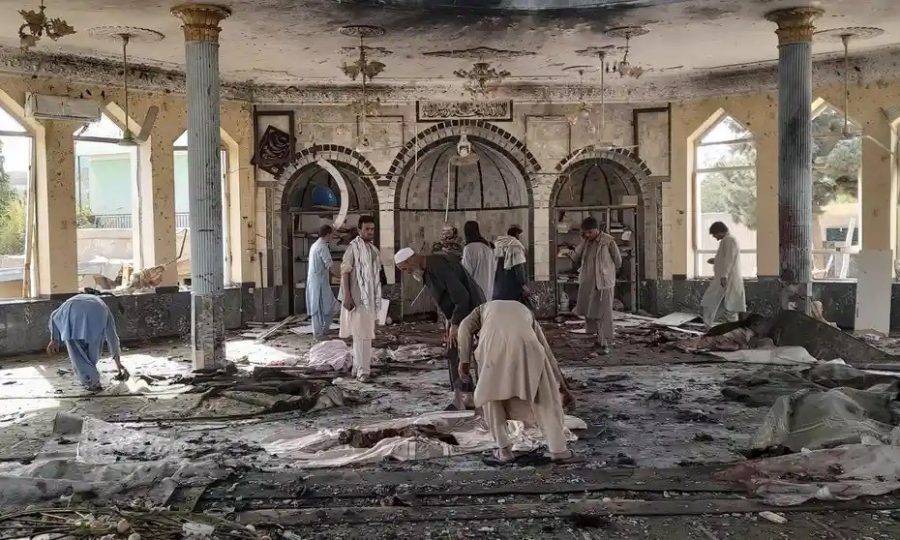 On Friday, the terrorist group ISIS-K executed a suicide bombing inside of a Shia mosque in Kandanar, Afghanistan, killing at least 47. According to Axios, after two terrorists gunned down the mosque’s security guards, one detonated their suicide vest at the entrance of the mosque, while the other went inside of the crowded holy building and exploded his bomb. Shias are a minority branch of Islam under persecution from various Sunni Islamic extremist groups, such as ISIS-K. This attack is not only a disconcerting tragedy, but also a display of an old pattern that has been plaguing the Afghan people for almost 50 years.

After a communist coup in 1978, Afghanistan was thrown into never ending instability. The new leadership’s hardline communist policies wanted rapid upheaval of Afghanistan’s ancient systems and met any resistance with violence, leading to revolts across the country. The Soviet Union initially deployed soldiers to assist their comrade-nation, but its involvement quickly descended into a full-scale invasion against the Afghan guerrillas. The chaotic war dragged out for years with little progress- costing the lives of over half a million civilians – and is often thought of as the ‘Soviet’s Vietnam’.

The USSR – on the verge of collapsing themselves – pulled out of Afghanistan in 1989, leaving behind a disjointed and illegitimate puppet government. Meanwhile, the revolting groups, called the Mujahideen – mainly funded indirectly by the US through Pakistan – grew stronger. Eventually one group, a radical Islamist organization called the Taliban, deposed the weak communist regime. They installed their own brutally repressive and ultraconservative system, with which they violently enforced draconian laws by terrorizing Afghan civilians. At the same time, they engaged in a war against the resisting Northern Alliance, a military faction that prevented a full Taliban takeover of Afghanistan. After the September 11th attacks, US intelligence discovered the Taliban helped hide some members of Al-Qaeda, the group that orchestrated 9/11- the worst terrorist attack in world history. This revelation led to an American invasion of Afghanistan, subsequent overthrow of the Taliban government, and the founding of a new, democratic administration to rule Afghanistan in accordance with American policy. The US was criticized for many accidental killings of Afghan civilians after mistaking them for terrorists, but continued to occupy the country, helping the new government fight pockets of Taliban resistance.

The American conflict and occupation of Afghanistan lasted nearly two decades and cost $2 trillion of taxpayer money, and the lives of 47,000 Afghan civilians and over 6,000 Americans. This, coupled with the wave of public opinion against the military industrial complex, caused the US to pull out of Afghanistan in August of 2021, abandoning its premature and chronically corrupt puppet-government.

Without US military support, the democratic Afghan government shortly collapsed in the face of the Taliban tide, similar to how the communist Afghan government was rapidly defeated by the same group just 32 years earlier. In the chaos of the terrorist takeover and the American evacuations, a relatively small and underground Islamic extremist group, ISIS-K, has managed to gain prevalence by attacking both the Taliban as well as innocent Afghan civilians, usually those of the Shia minority. Like the Mujahedeen for the communist government, the Northern Alliance for the Taliban government, or the Taliban for the democratic government, it appears the new revolting faction against the established government may be ISIS-K.

With tyranny reigning rampant in Afghanistan – and most resistance in the hands of more oppressive movements – many Americans are now questioning whether or not the US pulling out from Afghanistan was a good idea, seeing the devastation that has occurred since the evacuation. Briar Woods students were asked for their opinion on the matter, with an anonymous junior saying “Sure there have been egregious moments in the Middle East where the US may have helped… but for the most part America has stood complacent, meddling a little bit every now and then… They haven’t really done much overall besides having troops around the area…There have been much better times to pull out than the current state the Middle East is in… [The US should’ve pulled out] a few years ago but not now.” It seems that even in the wake of this tragedy, Briar Woods students still think the US should have left even earlier and let the nation determine its own fate, rather than let a foreign country determine it for them.

The bombing of the mosque is the latest in a string of ISIS-K attacks occuring in Afghanistan over the last few months. Taliban soldiers and Afghan civilians have both been targeted in a clear attempt by ISIS-K to gain prevalence across the nation. While on the surface it might seem as if the Taliban and ISIS-K are very similar ideologically, with them both being ultraconservative Islamic extremist groups, a few fundamental differences make them fierce enemies. ISIS-K, and its more infamous affiliate, ISIS, believe the Taliban are too nationalistic in their goals, since they only wish to establish an Islamic Emirate in Afghanistan, while ISIS and its affiliates wish to establish a caliphate that includes the entire Muslim community, with some claims going as far west as Portugal, as far north as Austria, and as far east as Indonesia. According to the Diplomat, ISIS and affiliates also believe that the Taliban haven’t gone far enough with their obliteration of Afghan cultural traditions, as they incorporate some of them into their oppressive rule. Members of ISIS-K say that any adherence to any sort of system of traditions that isn’t directly in line with Sharia law is heresy. Judging by these suicide bombings, it seems that these few disagreements between the two violent extremist groups may repeat the pattern of more bloody fighting between insurgents and the government in Afghanistan.

Throughout this cycle of persistent violence, warfare, and oppression, the greatest sufferers have been the innocent men, women, and children who have been caught in the crossfire of proxy wars between world powers and senseless, dogmatic slaughter by terror groups. Afghanistan is not a country, but instead simply a collection of independent tribes, and yet every invader and oppressor, foreign and domestic, attempts to accomplish the impossible task of uniting the nation, inevitably leading to even more bloodshed. Its isolated mountains make total victory by any side impossible, with small, hidden caves perfect breeding grounds for extremism, while its geographical positioning, between Iran, China, Pakistan, and Russia’s sphere of influence make it a constant victim of invasion by superpowers, primarily at the cost of the Afghan civilians. To be put in the absurdly awful situation where they must beg one oppressive, radical terrorist group, the Taliban, to protect them from another oppressive, radical terrorist group, ISIS-K, is a uniquely horrible scenario. Throughout all the overarching patterns of the rise and fall of governments and the return of invaders, one must remember the astronomical amount of human suffering happening in the lives of each and every innocent Afghan, with this devastating mosque bombing just a drop in an ocean of equally abominable and violent acts committed by many different factions over the course of 43 years.