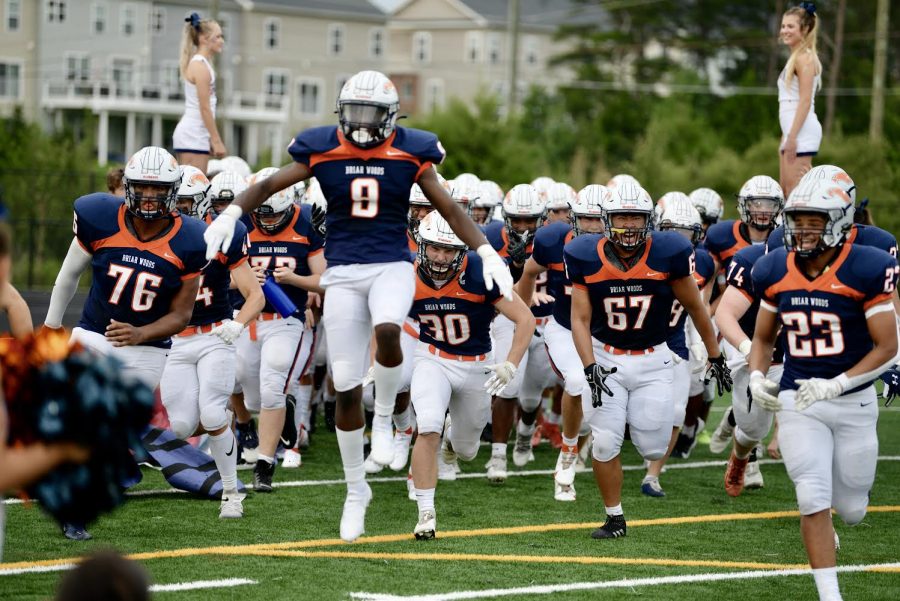 Our very own Briar Woods Falcons will face off against the Forest Park Bruins in a highly anticipated homecoming game this Friday.

The varsity football team currently holds an 0-3 record, losing to Broad Run, John Champe and Hylton. However, the Falcons refuse to back down and are applying a whole new approach to the upcoming game and remainder of the season. When asked about the changes being made to the team’s game execution, Zavier Kennedy, class of ‘22, said, “We’re going to be running the ball a lot more.” Kennedy, typically seen at running back, will undertake the role of quarterback this Friday alongside fellow Senior Sebastian Vargas. “Coach Burnett has recently changed up the whole field; we have new schemes,” says Vargas. The team is already showing improvement with the plays put in motion by our coaching staff. These changes were introduced during the past few weekday practices. Paying closer attention during practice is just one way coaches are able to convey their visions. Also, both upper and underclassmen partake in junior varsity games in order to gain more “reps,” or experience.

A losing streak such as Briar’s may stem the question, “What keeps the team motivated each week?” The answer is simple: the mutual grit and determination within the team. “We never give up. It doesn’t matter how things are going for us,” Luke Schalow, class of ‘22, said, adding “We’re never gonna stop fighting.” Determination is a key component of the team’s dynamic and is what drives them to better themselves each game. Alex Gutierrez, class of ‘22, says his team “always fights ’til the whistle.” For the Falcons, their work is never complete; there is always room for improvement. Not to mention, they have a bond like no other on and off the field. Some say that also contributes to their performance and how they work together. “We’re really connected off the field and we know each other very well. I feel like that helps us with chemistry on the field,” says Zavier Kennedy. “Our bond is pretty strong. We’re very goofy, but we know how to be serious at the same time,” says Sebastian Vargas.

Team managers also make numerous preparations for gameday in order for the team to play to their best abilities. “Although we aren’t playing on game days, we do just as much preparation for the team to make sure that everything runs smoothly before and during the game,” says varsity manager Jenna Jalloh. Viewers often pose the question, “What exactly do managers do?” Well, team managers take care of inventory and partake in a number of tasks during games such as helping referees with footballs, filling and distributing waters, and taking film from the press box or end zone.

New execution, continuous motivation, and a love for the game just about sums up our Briar Woods varsity football team. So why not come out and support them? If you are interested in attending the home game on Friday, September 17, visit https://events.ticketspicket.com and search Briar Woods High School to purchase tickets. Don’t forget, the theme of the game is tropical out. Be prepared for bright colors, exotic leis, and the crowning of our homecoming queen and king during halftime! So show up, show out, and bring the spirit to the student section. Let’s go Falcons!