A Look Back at the Central Park Jogger Case 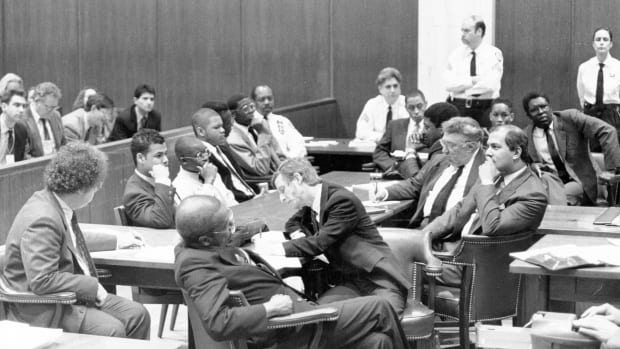 Walking through a local neighborhood with some of his classmates, a boy is chatting with his friends. He and his companions do this every day, but this day was different. A cop car pulled up next to them. “Put your hands where I can see them!” Despite the fact there is no sufficient evidence, they are still incarcerated for a crime they did not commit. These boys, dubbed the Central Park 5, were the accused perpetrators of the Central Park jogger case.

Five teenage boys were incarcerated for the reputed rape of a female jogger in Central Park during the early hours of April 20, 1989. The crime followed a string of attacks launched by a group of 30 teens. The assault on Trisha Melli, as described by a policeman, was “as [bad] as anybody I [have] ever seen beaten.” This attack specifically incited heavier police investigation, as the police made an additional 14 arrests in 48 hours. The suspects were narrowed down to five teenagers: Korey Wise, Kevin Richardson, Raymond Santana, Yusef Salaam, and Antron Mccray. Interestingly enough, the accused perpetrators were all black.

The 5 teens, all ranged from ages 14-16 years old, were either African or Afro-Latino Americans. All the boys came from a financially unprivileged background, most coming from Schomburg Plaza on Fifth Avenue. While their parents waited outside the room, each of the teens pleaded not guilty.

Out of the 5 teens, 4 of them confessed to being present to other attacks in Central Park on the fateful night. The New York Times noted their statements as accurate, unlike their confessions to the jogger. They all stated different times and events and locations of the jogger attack, placing it near the reservoir or walkways. All of the boys confessed to being accomplices of rape but later retracted the statement within 4 weeks.

The boys claimed that the police intimidated, lied, and coerced them, leading the boys to make false statements. This is one of the many examples of racial discrimination against minorities in the case. Reverend Calvin O. Butts said “[t]he first thing you do in the United States of America when a white woman is raped is round up a bunch of black youths, and I think that’s what happened here.” Many people disagree with this, Donald Trump himself included. Having heard of the news he called for the return of the death penalty in the paper, wanting “criminals of every age… to be afraid.” After the paper went out in print, Yusef Salaam and his family started receiving death threats in the mail.

The articles specifically are what secured the conviction of the Jury during the trial, affecting the outcome of the case as a whole. The youngest of the five victims received 5 to 15 years in juvenile facilities and adult jail.

In 2002 Matias Reyes, convicted serial rapist and murderer confessed to the assault and rape of Trisha Melli, only 17 at the time. Some police sources claimed that Reyes confessed to gain favor and protection for Korey Wise. Authorities later vacated their convictions in December 2002.

As compensation for the years spent behind bars, the group received 44.9 million dollars. Today these men – once ravaged by the racially biased system – thrive in today’s world, but they will never forget the harrowing experiences that shaped them. It is a glaring example of how assumptions cast onto groups of people are as good as presumptions that mountains are inevitably going to become volcanoes.