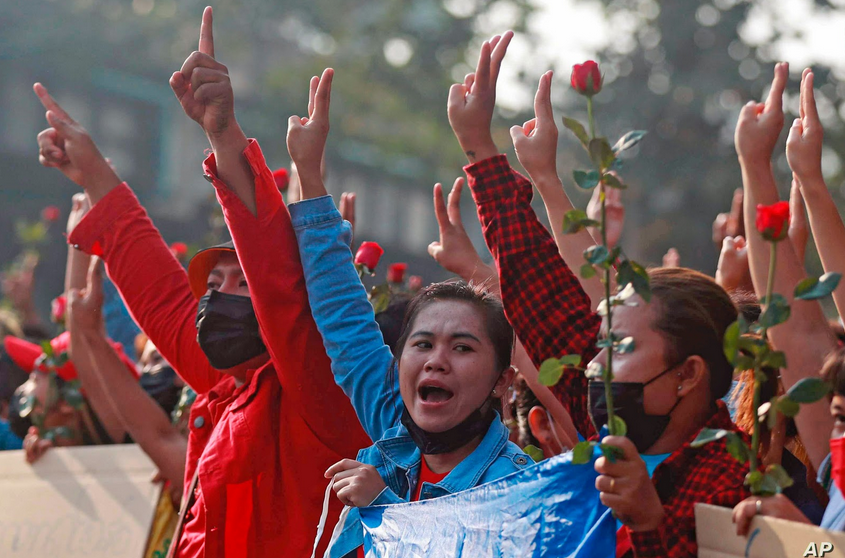 A woman clad in black and yellow danced to the bassline of military trucks rumbling toward the capital to seize power. On February 3rd, after former State Counsellor Aung San Suu Kyi’s party swept the election this November in Myanmar, Senior General Min Aung Hlaing cried voter fraud and subsequently claimed control of the nation.

The Ministry of Information declared “Democracy can be destroyed if there is no discipline” after imposing a curfew, a ban on protests, and restricted internet access for the country. Police violence grew as social unrest increased. Anti-coup sentiments appeared around the largest cities in the country: Yangon, Mandalay, and the capital Naypyitaw. An ocean of red washed over the streets; the protesters waved a red flag embroidered with a star and golden peacock symbolizing the National League for Democracy. Hands are held high with the thumb and fifth finger held down in an homage to Suzanne Collins’ Hunger Games trilogy. The symbol represents solidarity for democracy movements.

UN rapporteur Tom Andrews warned of bloodshed as reports of soldiers being transported into Yangon came into light. “I am terrified that given the confluence of these two developments­ — planned mass protests and troops converging — we could be on the precipice of the military committing even greater crimes against the people of Myanmar,” he expressed in a statement made by the UN Human Rights office. 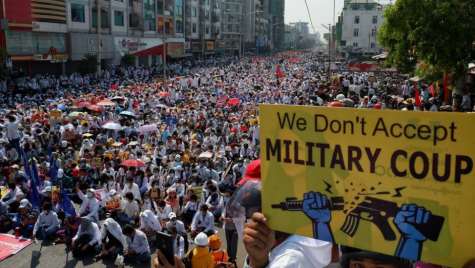 The Myanmar authorities detained the overturned leader, a  1991 Nobel Peace Prize winner who ushered her country toward democracy, claiming she had illegally imported walkie talkies. They stated in a document that when searching Suu Kyi’s household, they found illegally imported radios, and were used without permission from her bodyguards. This infraction could lead to two years in jail.

A month passes. The protests continue. The peaceful demonstrations take a turn for the worse as protesters are killed: One woman is shot in the head by police, another two are dead and countless injured from a police fire; at least 18 are killed as live ammunition is fired into a crowd, and March third, the deadliest day since the start of these protests, 38 are dead. Among the protesters, journalists attempt to capture the chaos. Six are placed under arrest and imprisoned under a public order law restricting fake news. The militia cabinet amended the law last month to increase the maximum sentence.

The US condemned the coup a day after the mass killing, demanding the release of detained reporters and demonstrators. The state department said that it was working with other countries to send a message of consequence for the military’s actions and criticized the heavy handed response to the protests in an effort to mitigate their cruel tactics. Even after facing criticism from the world’s leaders, the junta are unlikely to stop their actions. Russia and China, Myanmar’s largest supporters, are still selling weapons to the country and have permanent seats on the UN council, granting them the ability to veto measures the UN may take.