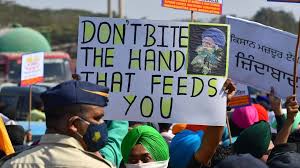 The farmers in India have had enough. In September 2020, Prime Minister Narendra Modi’s government passed three acts – known as the Farm Bills – which decimated formerly sanctioned safety nets. Each of the three bills were divisively aimed at tearing down existing regulations in the agriculture sectors and allowed for large corporations to swoop in and steal profits.

Previously, farmers sold their crops in regulated markets called mandis. Mandis allowed for auctions in which traders would bid for crops with transparent costs. The highest bidder claimed ownership of the crop, stored it, and later sold it in local markets and grocery stores for profit. Mandis created protection for the farmers by setting a Minimum Standard Price (MSP). With bidders unable to bid below it, farmers were able to make a living wage.

The first of the three bills works to move trade beyond the safety of mandis. Farmers would now be offered the freedom to sell to private companies, with which higher prices could potentially be negotiated, providing farmers the ability to increase their wages and improve farming practices. This act creates a dual system – one regulated by the government and one leaving the farmers at the mercy of private companies. The second bill allows for private deals between traders and farmers to occur with little to no oversight. Prices once set by the government, with MSPs, would now be stripped due to a provision of the act that allows private companies to override the regulations followed by traditional mandis. While farmers are still granted a choice between the markets they bring their crop to, fear arises when looking to the potential future of government-regulated markets.

Initially, private companies will offer higher prices, creating an illusion of care for the benefit of farmers. This illusion will drive farmers away from government-regulated mandis, with the attraction of higher wages in the short run. In the long run, however, mandis will lose power and farmers will be forced to take highly unregulated deals from private companies, stooping wages to extreme lows and leaving farmers entirely dependent on large corporations.

The impact has already been felt. In the state of Madhya Pradesh, 40 mandis have shut down due to lack of business, forcing farmers to settle for wages set by private companies. With the agriculture sector housing 50% of the jobs in India, and yet only accounting for 15% of the country’s Gross Domestic Product (GDP), farmers are at a disadvantage. These acts further the threat of private business and leave farmers starved for funds.

The third act hurts consumers directly. It removes foods – such as cereals, oils, potatoes, onions, and more – from an essential commodity list, which protects items high in demand from disproportionate pricing. With the removal of certain foods from the list, private companies are able to buy crops from farmers at reduced prices and stock the produce in warehouses instead of releasing it to public markets. This storage, in turn, creates increased demand, and companies are able to release goods at higher prices.

Protests in India have escalated due to the enactment of the three Farm Bills. The government has acknowledged the farmers’ grievances and suspended the bills for 18 months.  The farmers, however, are undaunted and have vowed to keep up their efforts until the bills are eradicated altogether.